Summaries of the findings of these four scientific research projects are given below. Details for obtaining the full papers are also given. A huge amount of time and effort has been provided on a voluntary basis to carry out and complete these scientific studies. All those who assisted, including staff at the Ecosciences Precinct, University of Queensland, Fisheries Queensland and NSW Fisheries, are sincerely thanked. 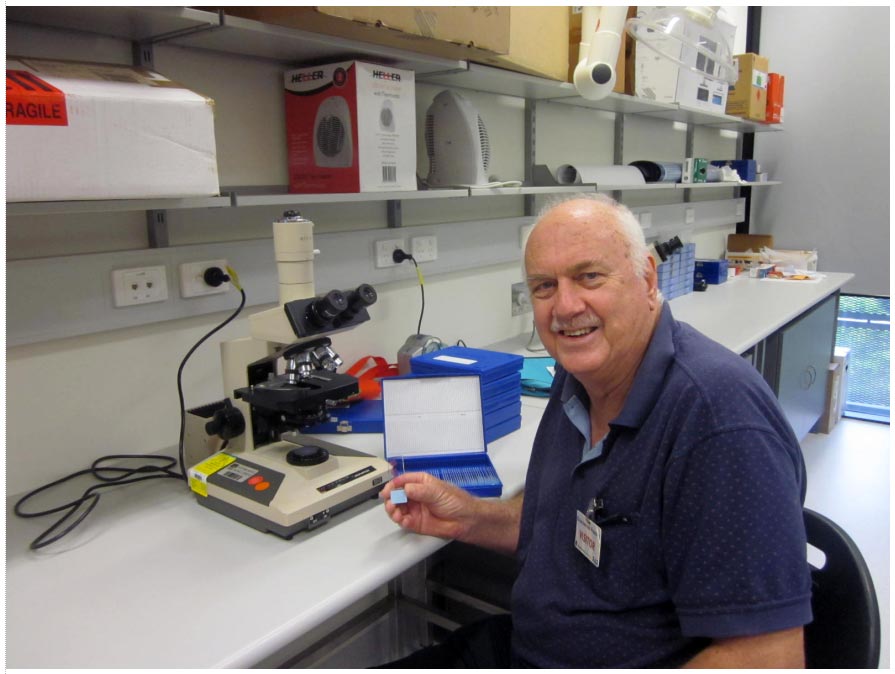 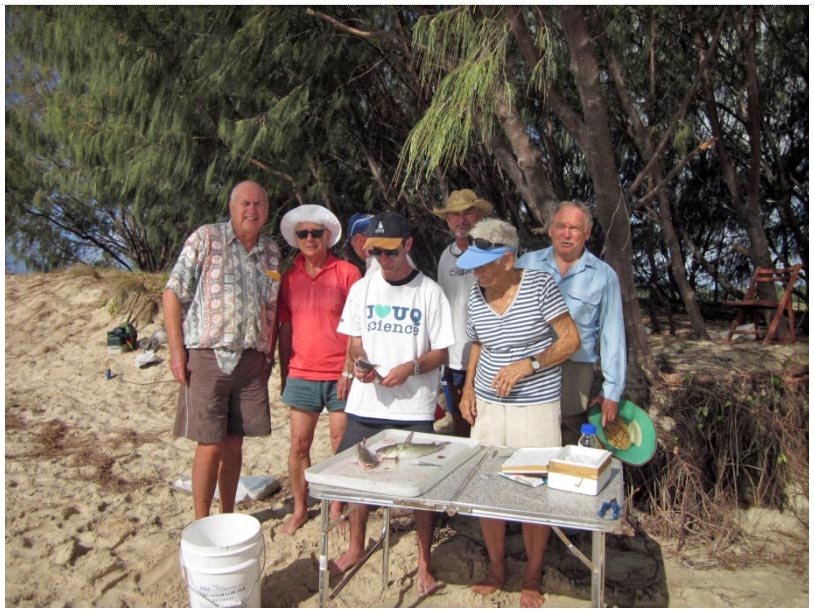 1. Saddleback in bream caused by a physical injury.


Saddleback syndrome in yellowfin bream [Acanthopagrus australis (Günther, 1859)] in Moreton Bay, Australia: its form, occurrence, association with other abnormalities and cause†

Summary
The aim of this study was to determine if saddleback syndrome (SBS) in a wild population of yellowfin bream (Acanthopagrus australis) was the result of a developmental defect or caused by physical injury. Information was collected in 2012 on the incidence of SBS and other abnormalities in this species in Moreton Bay, Australia. Abnormalities in adult fish (>250 mm Total Length, TL) with SBS (n = 47) were compared with those without SBS (n = 30). A sample of juvenile fish (n = 404) was checked for the presence of SBS. The results show that scale loss, scale pattern misalignment, lateral line fracture and pectoral fin abnormality were closely associated with SBS. SBS was uncommon (<2%) in juveniles >70 mm TL, but common (>12%) in the larger juveniles (70 - 215 mm TL). These results, together with the findings that scale loss associated with SBS in adult fish occurred in the range 80 - 245 mm back‐calculated TL, indicate that SBS and the related abnormalities in yellowfin bream are a result of physical injuries to larger juveniles (>70 mm TL). The reduction in the incidence of SBS from approximately 12% in the larger juveniles to 5% in adults is evidence of mortality associated with SBS. 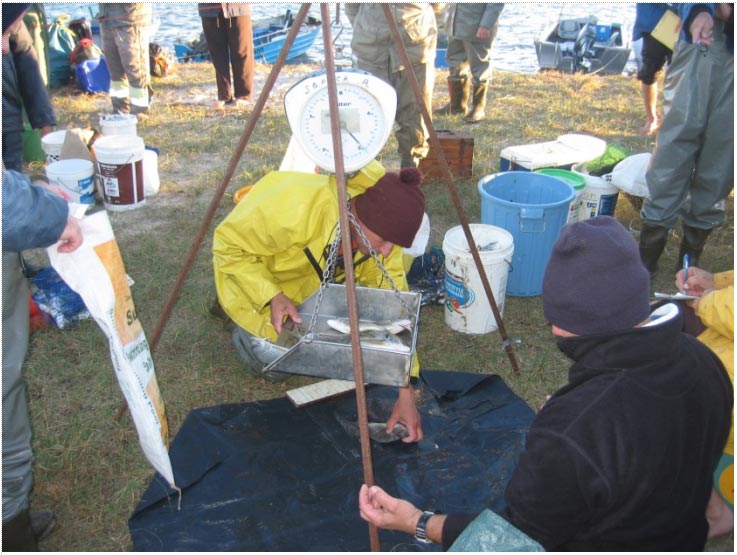 Specimens of bream supplied by QAFCA and SQAFCA recreational fishers. 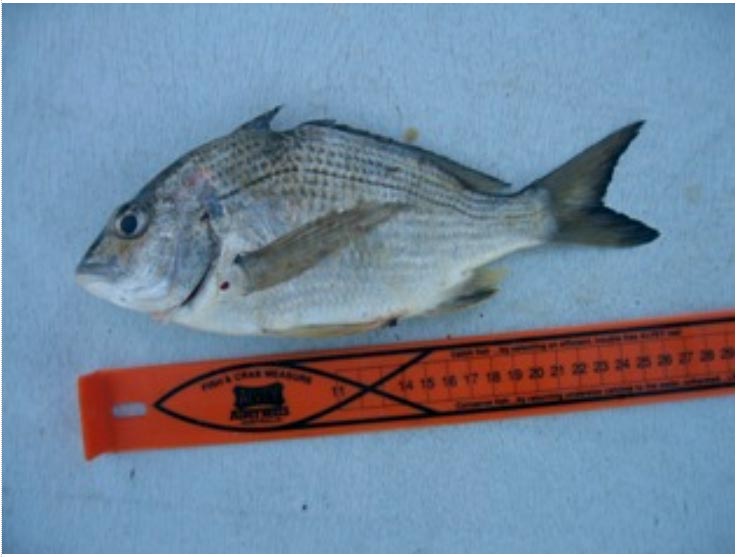 A typical bream with saddleback. – caught by a recreational fisher in SE Queensland.
Copy of the full paper is on the Sunfish website: Editorials – Projects – Bream Project.

ABSTRACT
Dusky flathead Platycephalus fuscus form seasonal spawning aggregations where estuaries meet the ocean in eastern Australia. The present study at Jumpinpin in south Queensland shows that dusky flathead have a protracted spawning period with serial spawning during summer (November to April). They are rudimentary hermaphrodites with sex determined at an early juvenile stage. Sex ratios are skewed with males most common in the smaller size-classes (< 50 cm TL). Mid-sized females (45cm - 69 cm TL) dominate the production of eggs due to their abundance in the spawning aggregation. Within the female component of the spawning aggregation, the occurrence of individuals exceeding the current maximum size limit of 75 cm TL is low (2.6%). Parasitic nematodes (philometrids) occurred in 8% of ovaries. Degenerated ovaries, in which atretic oocytes are common, are present in half of the very large females (70 cm - 75cm TL) examined. The current minimum size restriction of 40 cm TL for dusky flathead provides protection for 73% of males and 15% of females within the spawning aggregation. 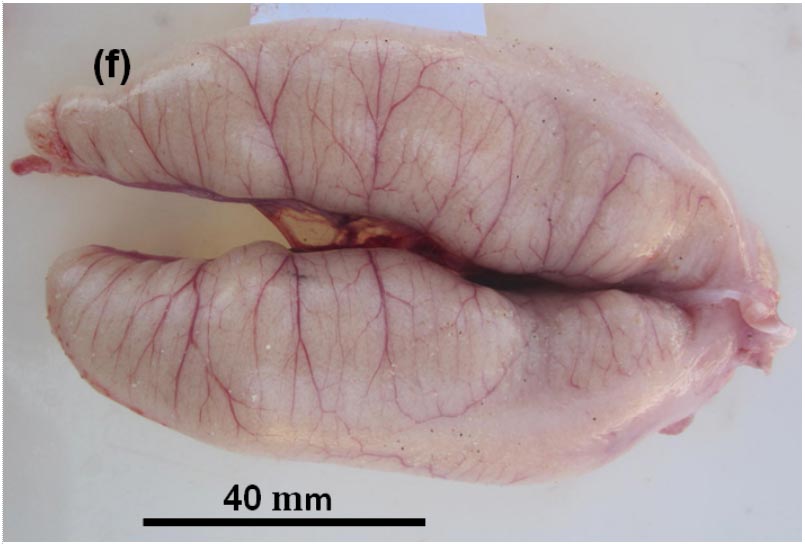 Above: Degenerate (mushy) ovary from a large female dusky flathead. 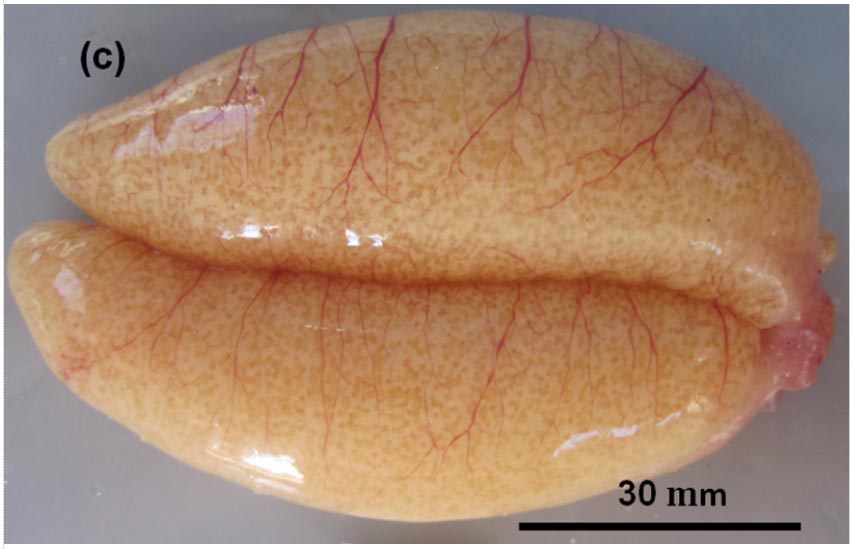 Above: Running ripe ovary from a mid-size dusky flathead.

A copy of the full paper is on the Sunfish website: Editorials – Projects – Dusky Flathead Project.

A full copy of this paper may be purchased from the publisher. Go to: https://www.publish.csiro.au/cart

4. Reproduction of female dusky flathead in the Clarence River, NSW.

The aim of the present study is to examine developmental changes of oocytes and ovaries of a wild population of dusky flathead Platycephalus fuscus (Cuvier, 1829). This fish is endemic to the east coast of Australia where it inhabits estuaries and coastal waters. It is extensively fished throughout its range. It is a serial spawning teleost, capable of producing vast numbers of externally fertilised eggs in batches over a protracted annual spawning period. Successful egg production, as indicated by the presence of hydrated oocytes and post ovulatory follicles, is commonly observed in small and mid-size females (35 cm – 65cm Total Length; 2 – 6 years old) which numerically dominate the female component of the spawning aggregation. Oocyte atresia, at various levels, commences at the vitellogenic oocyte stage, and occurs in all mature fish during the spawning period. Mass oocyte atresia and degenerate ovaries were commonly observed in large fish (>70 cm Total Length and 7 years old), indicating that reproductive senescence occurs after females reach this size.

This paper is available, free of charge, at: https://escientificpublishers.com/oogenesis-oocyte-atresia-ovarian-development-and-reproductive-senescence-in-the-dusky-flathead-platycephalus-fuscus-teleostei-AVAS-01-0004

Brief Summary - Dusky Flathead female reproductive biology
1. Dusky flathead do not change sex from male to female. Sex is determined at the juvenile stage and individuals maintain that sex. However there is a marked sexual dimorphism with females growing to a much larger size than males.

2. Mature females range in size from approximately 35cm to 100cm Total Length. However the mid-size females numerically dominate this component of the dusky flathead population. For example in the Jumpinpin study fish over 75cm made up 2.6% of the female spawning aggregation, and Gray and Barnes in the NSW study report an even smaller proportion of females fish over 70cm. Due to their relative abundance, the mid-size females dominate egg production - the large females >70cm, although potentially capable of producing large amounts of eggs by individuals, make a very minor contribution to egg production by the total female spawning population.

4. How important are "super spawner" dusky flathead? The recent debate in the journal Science covered the super spawner topic. A very highly regarded stock assessment scientist made the comment: Ray Hilborn, a fisheries biologist at the University of Washington in Seattle, argues that because superspawners are relatively rare, even in unfished populations, their overall contribution to the population is not particularly great. Accounting for superspawners would make little difference to how you manage a fishery. This view is supported in the case of large female dusky flathead, based on the recent scientific research.